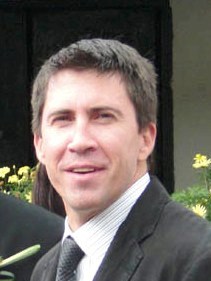 Rick Swope was raised in Chicago and later Northern Utah, where he became an avid mountain biker and skier. He later opted to move east and pursue his interest in literature at West Virginia University, where he completed his M.A. and Ph.D. in English and also taught courses in both composition and literature. In the Fall of 2001, he accepted a position in the English Department at the University of Puerto Rico where he now offers courses on American Literature and Contemporary Fiction. His research projects have combined his interests in such diverse subjects as urban space, the avant garde, detective fiction, film noir, punk rock, and ecological studies. His articles have appeared in Contemporary Literary Criticism as well as such journals as African American Review, Science Fiction Studies, and Critique. His other interests include movies (mostly of the independent variety), basketball, and music. He is currently the director of the Richardson Seminar Room.