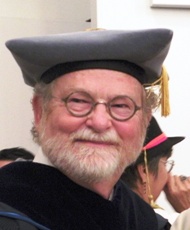 Andrew Hurley received his Ph.D. from Rice University in the theory of the novel (in an area at the time called “narrative strategies,” later becoming one of the main sub-areas of reader-response theory; in Hurley’s case, specifically non-third-person narrators in poetry and fiction); he also specialized in nineteenth- and twentieth century U.S. literature and in the modernist period (poetry and fiction) in England, Europe, and the U.S. He came to the University of Puerto Rico in 1973 to teach those areas, but within a few years his academic life took an unexpected turn. In 1980, a chance invitation by the English Department to the distinguished poet/translator and New Yorker magazine essayist Alastair Reid introduced Hurley to translation, and he has never looked back.

Hurley’s first translations, three or four essays for Borges, A Reader (published by now-defunct E.P. Dutton Company), appeared in 1981, and a year later, a book of poems (co-translated with Alastair Reid) by Cuban dissident poet Heberto Padilla. Thanks to Reid’s mentoring and a few well-placed recommendations (Hurley acknowledges his indebtedness to Reid for his entire subsequent career as a translator), Hurley was chosen to translate yet another Cuban author, Reinaldo Arenas, and over the next decade and a half translated seven of his novels.

Hurley now specializes in the translation of fiction, but he jumps at the chance to translate academic texts, as well: history, architecture, archaeology, literary criticism, memoir. . . Although he was originally drawn to translating fiction because of his interest in narrative strategies and in stylistics-the need to recreate a personal or historical style-, as an academic he is intrigued by the research involved in bringing texts from one language over into another, the issues not just of terminology but of underlying knowledge, often quite specialized, that are involved in “choosing the right word.” He believes, he says, that translators must be “serial specialists.” In his teaching, Hurley emphasizes the research aspect of translation and the translator’s weighty responsibility to “get the facts right,” even in essayistic writing and fiction.

Hurley has now published well over thirty book-length translations in many fields, and numerous short stories, essays, and poems. He also works with the Museo de Arte de Puerto Rico, the Ponce Art Museum, the College Board, the Conservation Trust of Puerto Rico, the Banco Popular, and other cultural and corporate/cultural entities, and for the last twenty years has translated the accreditation reports and many other documents for the University of Puerto Rico, Río Piedras Campus. Hurley was honored with the designation of “Professor Emeritus” in 2009.