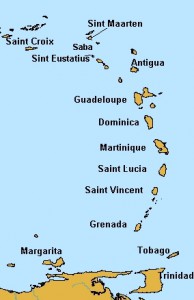 annual conference which focuses on the literatures, languages, and cultures of the Eastern Caribbean. Known as the “Islands-In-Between” Conference, it primarily takes place on different islands where there is no full-scale university campus, and the basic motivation is to bring a university presence to each island, make contact with local students and scholars, engage them in joint discussions on Eastern Caribbean literatures, languages, and cultures, and encourage research in these areas. Occasionally, the conference takes place on larger Caribbean islands and in countries on the South and Central American mainland that have a significant Eastern Caribbean presence.

Conferences have been held in:

2020 conference postponed until 2021 due to pandemic (see details below)

Call for papers 2021 conference in Martinique