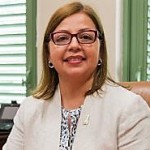 Carmen Haydée Rivera was born in Puerto Rico and raised in Boston, Massachusetts by parents who insisted on keeping Puerto Rican family traditions and customs alive within the US context. Her parents moved the family back to the island after spending years away from their birthplace. She received her Bachelor of Arts and Master of Arts degrees in British and American Literature from the University of Puerto Rico in 1988 and 1991, respectively. She later returned to Boston and earned a Ph.D. in Multiethnic Literatures of the United States from Northeastern University in 2001. Her teaching and research interests include American Literature, Diasporic Puerto Rican Writers in the US, Contemporary US Latino/a Literature, Literature of Caribbean Migration, and Women’s Studies.

She has served in various administrative positions, including Interim Chair of the English Department, ESL Coordinator, Graduate Program Coordinator, Associate Dean of Graduate Studies, Interim Dean of Academic Affairs, and Interim Chancellor for the UPR-Rio Piedras campus, among others.

Her publications include a co-edited collection of essays titled Writing Off the Hyphen: New Perspectives on the Literature of the Puerto Rican Diaspora (University of Washington Press, 2008) and a critical biography on Chicana writer Sandra Cisneros titled Border Crossings and Beyond: The Life and Works of Sandra Cisneros (Praeger Press, 2009). Additional critical articles appear in journals such as The Ethnic Studies Review, Centro Journal, Camino Real, Op-Cit, Revista Umbral, New West Indian Guide, Latino/a Research Review, Caribbean Studies, and Sargasso.