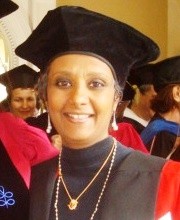 Nalini Natarajan was born in Madras (now Chennai) and raised in New Delhi and Bombay (now Mumbai). Upon graduation with an MA from Delhi University, she taught at the Jawaharlal Nehru University. She obtained her Ph.D as a British Council Scholar and a recipient of the Fellowship from the Committee of Vice-Chancellors and Principals of the United Kingdom from the University of Aberdeen, Scotland, U.K. Thereafter, she was hired into a tenured faculty position at Miranda House, Delhi, and taught there for a while. After a short stint as a postdoctoral scholar at Yale University, she moved to Puerto Rico in 1987 with her husband, tropical ecologist John Parrotta. Through her background and domicile, she combines an interest in India and its many regions, local languages and cultures, British domestic and imperial culture in the Nineteenth Century, feminist theory, and Caribbean and Latin American issues. She has proposed innovative courses in these areas, including her latest ones focusing on the city. Her recent books are Atlantic Gandhi :The Mahatma Overseas (Sage, 2013) and The Resonating Island: The Caribbean in Postcolonial Dialogue (Terranova, 2014). Her most recent work is in press titled, The Unsafe Sex: The Female Binary and public violence against women (Oxford University Press, Delhi, NY and London, forthcoming.)