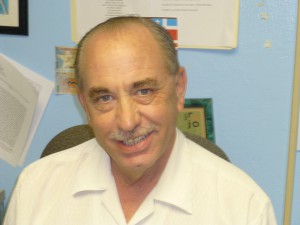 Born in Wisconsin and raised in Iowa, Robert Dupey has resided in Puerto Rico since the age of 18. He received a B.S.S.E. in Spanish from the Catholic University of Puerto Rico (Pontificia Universidad Católica de Puerto Rico) in Ponce. His teaching career began in Dr. Alfredo M. Aguayo High School in Ponce, teaching conversational English courses. He continued his professional career in the Metropolitan Area of San Juan in the Episcopal Cathedral School in Santurce, as Language Arts teacher for grades 7-12. In 1992, he obtained an M.A. degree in Spanish linguistics from the University of Puerto Rico, Río Piedras Campus. He later worked as an English professor in the English Department of the College of Humanities as well as in the College of General Studies. In 2006, he received his Ph.D. in Linguistics from the Hispanic Studies Graduate Program of the University of Puerto Rico. Prof. Dupey has been the ESL Coordinator of the English Department of the College of Humanities since 2007 and the Undergraduate Academic Advisor since 2012.  He also served as interim director of the Graduate Program in Linguistics (PGL) from May to December of 2012.  In 2018, he attained the rank of Full Professor.